The History of Mardi Gras

The History of Mardi Gras

Carnival is a time of festive merrymaking immediately preceding the liturgical season of Lent in the United States. The most popular celebration of Carnival began in Louisiana in 1837 and is today more commonly known as Mardi Gras.  Since then millions of visitors have partaken of the festive atmosphere, particularly in New Orleans French Quarter,  which borders the Mississippi River. The most popular form of entertainment during Mardi Gras are the parade’s which consists of marching bands, mounted law enforcement, and floats holding brightly decorated crew members. Beads, doubloons, and other souvenirs are thrown to eager spectators lining the streets!All these elements are meant to intensify the jubilant carnival atmosphere. 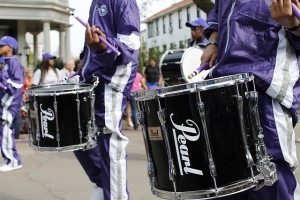 The word carnival comes from the Italian expression “cotton a levare,” which means to remove meat. This period of celebration has its origin in the need to consume all meat and animal products such as eggs milk and butter before the six-week Lenten fast.  Since controlled refrigeration was uncommon until the 19th century, the foods forbidden by the church at that time would spoil. Rather than allowing them to go to waste, families gathered together and consumed what they had.

Around the world and through the ages, several countries have had resplendent carnival celebrations since the 14th century.  Revelers in Venice Italy would observe carnival by concealing their faces making it impossible to differentiate between nobles and commoners. Today participants continue the custom and wear intricately decorated masks and lavish costumes often representing allegorical figures in the 17th century. 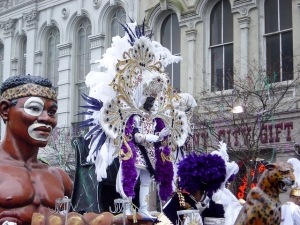 The European practice of holding carnival balls and masquerade parties before Lent was adopted by Rio de Janeiro’s middle class. In the new world, these celebrations took on African and Native American influence yielding what today is the most recognizable holiday in Brazil. Carnival ends on Mardi Gras, which is French for Fat Tuesday, the last opportunity to consume foods containing animal fat before Lent.  In addition to getting their homes ready by eliminating meat and dairy products, Catholics would prepare for Lent by ridding themselves of sin and receiving the sacrament of reconciliation for this reason the day before.  Ash Wednesday is called Shrove Tuesday from the Middle English word shriven which means confession.

We hope you enjoyed this article and learned something new!  If you would like to receive more articles, please sign up for our newsletter.  Interested in attending Mardi Gras with La Belle Vie Travel?  Simply fill out a contact form with your information and we’ll get back to you!