London and Paris are two of the largest, the most important, most famous, most powerful cities in the world. They really are a big deal! London is both the capital and largest city of England and the entire United Kingdom. Paris, is both the capital and largest city of France. Both cities not only dominate the culture of their countries, but dominate the culture of the entire continent of Europe!  In terms of metropolitan areas, London is bigger. The London commuter belt has just over 14 million people, while the Paris metropolitan area has over million people.

So London is basically around 21% of the UK’s population and Paris is basically around 19% of France’s population. The two cities are just 284 miles, or 457 kilometers apart, and there are probably more options than you realize for ways to go back and forth between the two. You can fly. You can take a train and ferry across. You can drive all the way. Wait…huh? Drive?!? Well, kind of, thanks to the Chunnel, an underground tunnel underneath the English Channel.

Both are two of the most expensive cities in the world to live in. However, the cost of living is lower in London compared to Paris, but both are among the wealthiest cities in the world. In terms of GDP, London is ranked 5th and Paris is 6th. Both are financial capitals of the world. The main industries of both are the service industries. Especially, the professional services in London and commerce in Paris.

London and Paris have lots of universities but London arguably has the highest concentration of prestigious universities in the world. Both have a bike sharing system. Both have hosted the Olympics (Paris twice, and London thrice). Both have a ridiculous amount of landmarks and tourist attractions. 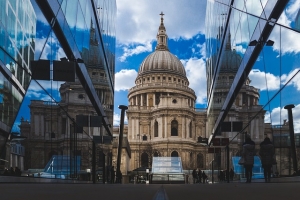 A few attractions of London include: the Houses of Parliament, St. Paul’s Cathedral, the Tower Bridge, The Tower of London, Hyde Park, Buckingham Palace, and The London Eye… actually, The Coca-Cola London Eye (I forgot that Coca-cola was taking over the world).

A few attractions of Paris include the Eiffel Tower, the Louvre Museum, Moulin Rouge, Notre-Dame, the Arc de Triomphe, The Unknown Soldier and Eternal Flame, Pont de Sully, Le Marais and Champs-Élysées. London does have more museums than Paris. Both aren’t that far from major bodies of water, although London is closer, right there near the North Sea. Paris, not too far from that English Channel I mentioned earlier. Related to this, both have temperate oceanic climates. 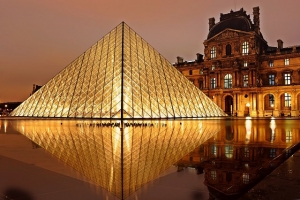 While both have four seasons, the temperatures don’t fluctuate too much. Paris gets a tad bit colder in the winter and a tad bit warmer in the summer. This may surprise you, but Paris actually gets more rain than London overall. London has more of the lightly spitting on you type of rain, and maybe seems gloomier with less sunny days and more fog.

They speak English in London and French in Paris. Actually, a lot of Paris residents do speak English. They often just pretend like they don’t understand you speaking in English. London often jokingly gets called France’s sixth biggest city due to having such a large French population. In fact, more French folks live in London than in Bordeaux. Paris is more densely populated than London. In the city proper, over 73% more dense.

On average, London residents are younger than Paris residents. London is growing at a bit faster rate than Paris. London is more multicultural and diverse. More than 18% of Paris residents were born in another country, which is a lot less than London. Yes, an increased number of migrants seeking asylum have arrived in Paris in recent years, but apparently they number only in the thousands, not hundreds of thousands. 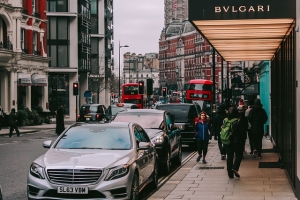 London has more billionaires and a lower unemployment rate than Paris. However, Paris has a lower poverty rate. Regular settlement in Paris goes all the way back until at least 2000 BC, whereas the London area appears to be first settled about 500 years after that. Both used to be part of the Roman Empire. Paris is older than London. A Gallic tribe known as the Parisii established what would later be called Paris around 250 BC, while the Romans established London in 50 AD.

By the Middle Ages, Paris had become the most important commercial center in France and London had become the most important commercial center in England. However, Paris rose more quickly. In the early 1300s, Paris was twice as big as London. The Black Death, which spread throughout Europe later that century, killed about a third of London’s population and a fourth of Paris. During the Hundred Years’ War, the English took over and occupied Paris for sixteen years. Paris remained more of a Catholic stronghold in the 1500s and 1600s, while London shifted to Protestantism.

After more and more Catholic Church property was privatized in London, many folks got rich there and trade went way up. During the English Civil War the majority of London residents supported the Roundheads. The Great Fire of London destroyed much of the medieval remnants of the city. Meanwhile, in the 1600s Cardinal Richelieu led the investment in architecture to make Paris the most beautiful city in Europe. By the 1700s, both Paris and London became THE places where the great philosophers and scientists of what became known as the Age of Enlightenment hung out.

Paris was arguably where the Enlightenment began, which later gave it the nickname the “City of Light.” In 1789, Paris was also the center of a lot of the violence and chaos that came out of the French Revolution. The Industrial Revolution began in Britain, so London had a head start compared to Paris in terms of the huge economic growth related to the rise of machines. Workers came to London in huge numbers during the 1800s.

From around 1831 to 1925, London was the largest city in the world, while Paris trailed behind, although Napoleon III helped revitalize the city in the 1850s and 1860s. During that time, Paris residents lit the streets and monuments with tens of thousands of gas lamps, and that City of Light nickname now made even more sense. Flash forward to the World Wars.

Thanks to the French and British victory against the Germans in the Battle of the Marne, Paris was spared. During World War II, however, the Germans easily took over Paris, and later dropped bombs on London. The reason why Paris is relatively intact today, and much of the older buildings in London are no longer around, is because they were destroyed by bombs dropped by the German air force in the Battle of Britain. Paris didn’t get those bombs. They just surrendered.  Since World War II, both London and Paris have been much more peaceful and prosperous places. So that sums up 2000 years of history…almost. 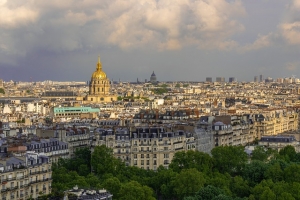 London has less air pollution. Paris has more people just hanging out outdoors. Outdoor cafes are definitely much more of a thing there. Every morning, the amazing smell of baked goods fills the streets of Paris, and if you go out to eat in a restaurant there, expect to be there much longer than you would be at a restaurant in London. In fact, Paris is just more slow-paced overall. Also…in Paris, you can drink in public. In London? Nope.

The lights on the Eiffel Tower go on for 5 minutes on the hour every hour every night. And yes, Paris does live up to its romantic stereotype. It’s common to actually see random people making out in the city, but these are all things you will need to see yourself! In conclusion, London and Paris are two extremely important global cities, two of the most exciting places to visit and inspiring places to live in the world. They’ve been through a lot and yet continue to lead the world into the future.

To stay up to date on our articles, please subscribe to our newsletter.  Interested in experiencing London and Paris yourself?  Simply fill out a contact form to receive more information on our upcoming trip!